We were all packed and ready to go . . . I looked everywhere for The Smiley Dog and couldn't find him! Hearing the honk of the truck's horn, I went out to the driveway and found him proudly sitting in the driver's seat of the Tacoma saying "Hop in, Pete! I'm driving the first leg!" Oscar claimed he passed an on-line driver's training course and pulled his license out of his wallet, showed it to me, and said "Let's go Pete . . . time's-a-wastin'!!! 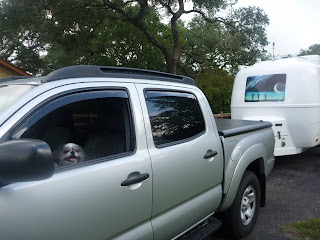 So off we went with Oscar grinning from ear to ear and me, "Mr White-Knuckles" in the passenger seat. He actually did a good job and got us to Aubrey's house southeast of Dallas where we assembled the Eggs for our convoy to the Appalachians. 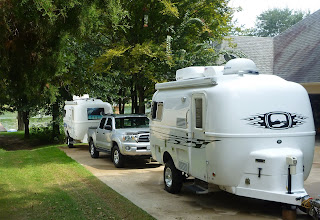 Oscar's been reminiscing about cooler times we had this summer, like the bank of snow near our campsite in the Rockies. He thought it was pretty cool, literally! 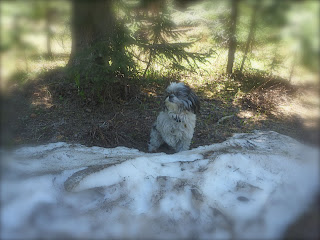 Although, he wasn't too keen on the guy that engaged him in a snowball fight! 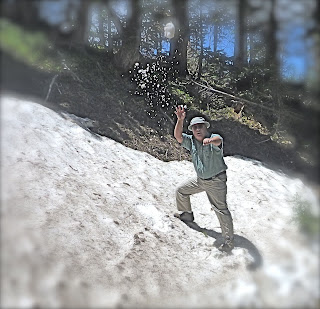 Oscar grabbed the camera and snapped a picture of this momma elk on one of our walks. 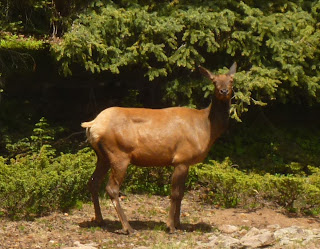 Although he wasn't able to go on the tour, Oscar enjoyed seeing the pictures of my tour of the Caverns of Sonora. I had a special, one on one 2 1/2 hour tour given by Jenn. Here she is standing in the Hall of Giants. 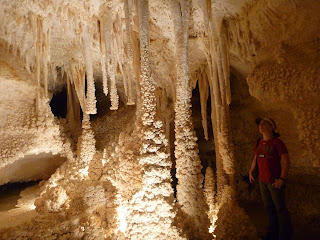 The formations are pretty under different lighting . . . 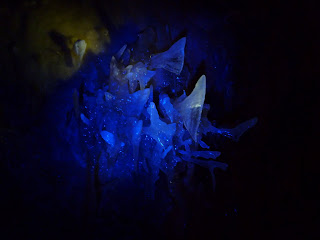 These are some of Oscar's new best friends, Jenn, Johnny and their dog, Rain. Jenn and Johnny are full time RV'rs with a great web site . . . check it out!
Hitek Homeless
We've been home in the Texas Hill Country for a bit, catching up with the kids & grandkids etc. It's time to hit the road again . . . it's festival time in the Appalachians!