Pete & I are having a great time at Lake Greeson. I really enjoyed the fast boat ride sitting on Betty's lap with the wind in my hair. Pete told me the funniest thing I've ever heard. He said there were CATS at the bottom of the lake . . . they were alive, and good eatin'!#?! While I firmly believe all cats should be at the bottom of a lake I said "Show me, Pete . . . this I gotta see." 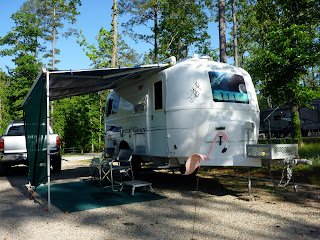 So that evening we all piled into the boat, driven by steely eyed Mountainborn. We had 72 jugs on board. Each one had fishing line and a hook wrapped around them. Who ever heard of catching a cat on a hook? Humans are so strange sometimes. 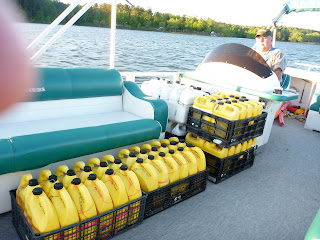 They picked up some bait traps which were put out yesterday. Each one had pieces of onion and toast which was used to attract small fish that could get into, but not out of the traps. 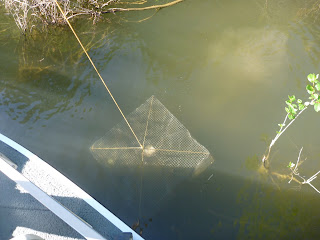 Here's a recently caught fish, kinda blurry, 'cause it's in mid-flop after being pulled outta the water. We go a whole bunch of these and put them in a big bucket of water. 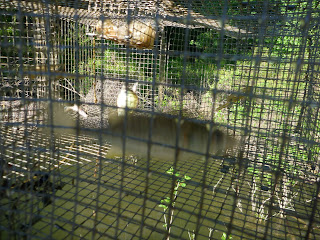 Mountainborn's wife, Betty, aka "Butcherknife" grabbed up them itty-bitty -fishies and stuck 'em on a hook in a way that they could still swim around. 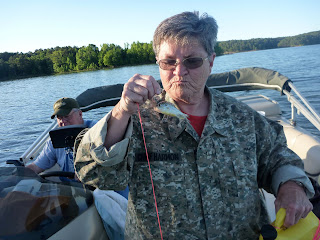 Then, get this, Pete hurled the fish on the line tied to a bright yellow jug way out into the water. He said it would attract the cats. ( Yeah, like those drowned cats can find a swimming fishy, HA!) 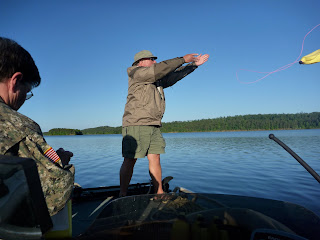 When they were done tossin' we looked back and the lake was peppered with floating jugs. Each with a weight and a fish doing the "cat dance" at the bottom of the line. Then they just drove back to camp and played dominoes and music and told fish stories to each other, none of which were true of course. 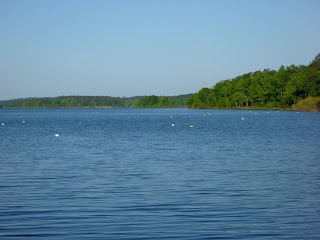 Next morning after early coffee watching the sunrise, Al, aka "Capt Ahab", and his trusty first mate, Larry, gathered up the deck hand volunteers and went out lookin' fer the jugs. 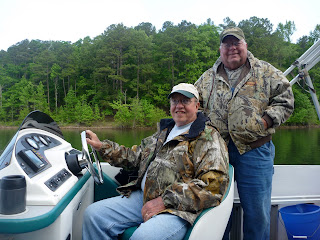 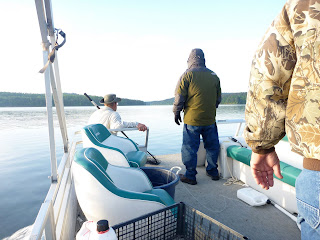 When they spotted one standing on end and moving through the water they yelled and got excited and danced around the boat like little kids, doing this delicate dance with nets and jugs and fishing line in hopes of landing a big cat. (I never understood why they were so excited about pulling an old dead cat outta the bottom of the lake) 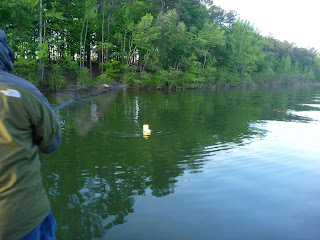 When they pulled the first net up I said "Woah there buddy. That's no cat . . . its a fish!" They all looked at me with silly grins and chuckled like they got one over on me. 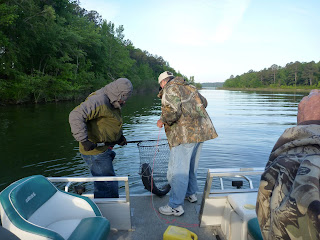 Aubrey got the catFISH with this thing called a lip grabber and held it up to see how much it weighed on the scale. The bigest one they hauled in was about 26 pounds. And they said those weren't the biggest ones out there by far. Wheew, I'd be scared to see a really BIG one! 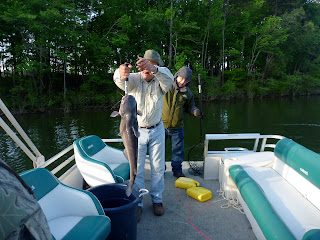 They plopped the catfish into a 30 gallon bucket and it just looked at me and said "Hey Oscar, come real close so I can whisper a secret into your ear." It still looked hungry so i just backed away. 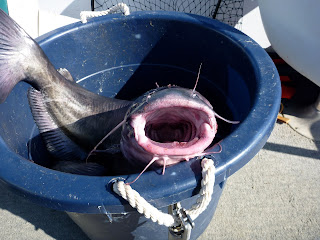 Up on land again, everyone had to pose with their fish. Here's Larry & Betty and Pete all holding up what they said would be tonight's meal. Over a 5 day period they just kept doing this and brought over 300 lbs of catfish to shore. Now that's a LOT of filleting . . . just ask Al & Larry. HA! 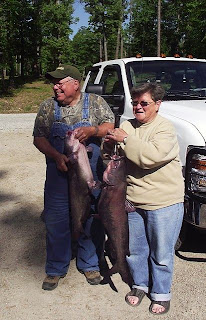 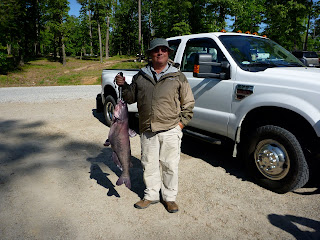 Larry & Al did the initial filleting. All the sensor lines and red meat which contains "fishy taste" were removed. They took the bucket-o-guts across the lake and tossed them ashore for the buzzards and the eagle to feast on. (No waste there!) Betty did the finishing trimming, and here, Tali & Karen are doing some of the final rinsing in preparation for the catfish coup-de-gras. 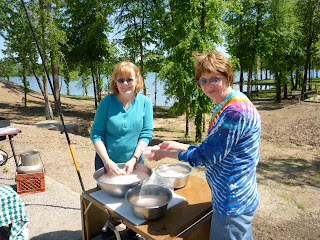 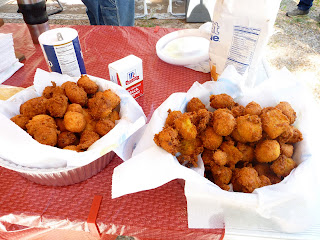 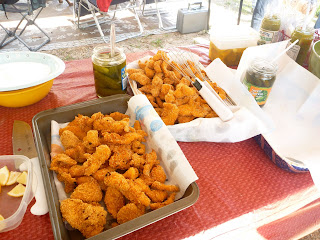 Jars & jars of green tomato relish. Lots of other side dishes ... slaw - 'tater salad, etc. It was real quiet around the table as they ate and enjoyed their cat-o'-the-lake feast. Sure smelled gooood! 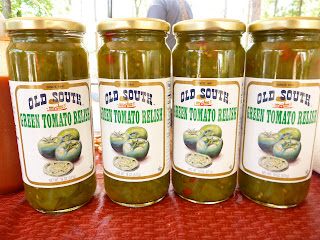 Here's my new best friend, James, who let me sit on his lap as he gave me some of that tender catfish meat without letting Pete know. he, he, he 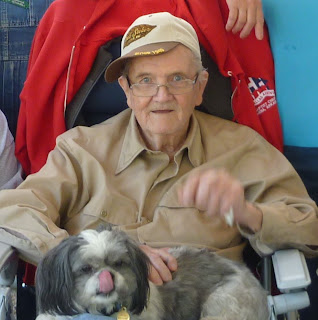 After the feed, Pete asked all my friends gather around. We posed for a Jugfest-2010 class photo just as James snuck me some more of that catfish which everyone saw but Pete. HAHAHAHA! 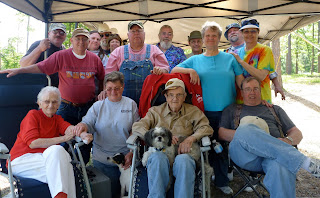 Now I'm hungry! I've never seen fishing done with jugs, so I learned something new today. Looks like you boys are enjoying your adventures!

Hey Oscar ! We got home alright, Though harm's driving was a bit fretfull. Good pix. Thanks for the update.
Dillon the retired drug dog & Poco the squirrel dog. See ya' high up in The Rocky Mountains fer' some squirrel treein' !

Hey Oscar!
Had fun playing with you at the lake yesterday!
Your friend, Blaze

HUSH, puppy! Them cats is GOOD eatin' Sounds like you got another good lesson in life and some adventures to boot!